I’ve heard them all. All of the insinuations that I either don’t exercise enough or am not capable of running very far or fast because of my weight. These “insightful comments,” are much too good to keep to myself so let’s take a look at a few of them, shall we?

~I’m trying out a new podiatrist who can hopefully figure out why my right foot is plagued with chronic pain. After spending approximately 1.3 minutes with me, Dr. Heel informs me that, “let’s face it. When we live in a great country like ours, we grow up hearing we can do anything we want. That’s our wonderful American dream! But the reality is you’re just not built like a runner. There’s a reason runners are tall and thin. But you just don’t have the body type to run. I’m sorry.” Gee. I was sorry, too. Sorry I was going to have to keep looking for a decent podiatrist.*

*Which by the way I found not only after Dr. Heel’s remarkable conclusions but his misdiagnosis of the problems plaguing my foot. My current competent doc put me in a proper pair of orthotics and my foot ailments are now kept to a minimum.

~A friend and I are appraising my front yard, trying to figure out why my recently planted magnolia tree looks shrunken and miserable. The possible solution? Tilling the soil because, after all, the work “will be good for your arms. It will tone them up and make them strong.” Hmmm. Guess the weight training at the gym must not be doing the job.

~”Patti, are you still running” asks Kathleen, the traffic coordinator at one of the multitude of radio stations where I worked over the years. “Yep, every other day.” “Doesn’t look like it,” snarks Ken Cruz, the afternoon DJ, passing us on his way to the on-air studio. Funny guy.

~”Oh, it’s so good to see you,” says Terri as she arrives at my house for dinner. “I brought the perfect appetizer for you. It’s very low calorie.”

Then there are the looks of  shock and surprise I’ve gotten through the years when I’ve shared with various people that I’m a runner. “I never would have guessed that,” is also common response. Okay, so I’m not thin nor, at this point in my life, even on the slender side. I’m not thrilled about this. I try to count calories, watch what I eat, etc. But it’s harder to lose weight as I’ve gotten older (fact not excuse) and my body will take whatever opportunity it can to hang onto the “f” word.

So, yeah, I’m a heavy runner. But I run. I’ve run one marathon, a handful of half marathons, and I’ve lost count of the 5ks. I train with a fabulous  group of runners several times a week. They’re like family to me and not one of them would ever think to make a crack about the extra weight I’m carrying. As runners, they know their bodies and they would never presume that I don’t know mine. We’re out there, running the streets together. All body types, shapes and sizes. Are most of them thinner than I? Yes. And maybe someday my weight will match theirs again. But even if it never does, I’ll see them on the road.

And they’ll see me. 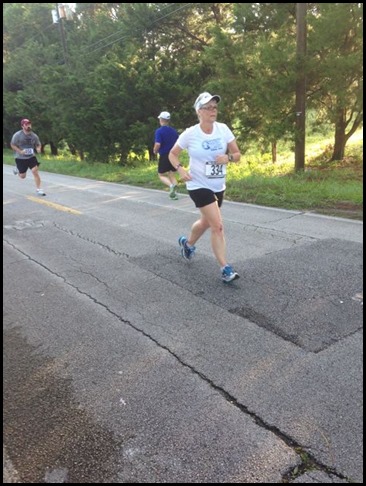 I’ve had to eat some rather large slices of humble pie over the past few years. My most recent bites of this foul curd have been especially hard to swallow. I’m a runner or at least have identified myself as such, especially since joining a formalized running program. The program is fantastic. Not only is it professionally coached (for an amateur like me this is a dream come true) but the friendships I’ve developed with other runners (nothing bonds you like mutual suffering) have been some of the most positive relationships of my life. But neither coaches nor friends could prepare me for a long series of injuries that sidelined me, forcing me to take my return to running, if not nice, then at least, easy.

Well, I’m not sure “easy” is the best way to put it but I’ve slowed down considerably and not by choice. I’ve learned how six months off from regular training will add minutes to what was once (for me anyway) a respectable pace per mile. The other night at track practice I thought I was running a ten minute pace. Imagine my shock when my watch informed me that, no, it was a twelve minute mile.  Of course, those extra ten pounds that seemed to come out of nowhere while I was recuperating* didn’t help quicken my step.  I’ve managed to drop five of those pounds but still, I might as well be lugging a couple of cantaloupes around the track.

*For those wondering, yes, I cross-trained. Swimming, deep water running, and some weight lifting. Still, nothing helps me keep off unwanted pounds like running. Well, running and putting my fork down.

I could have a real pity party about my diminished performance as a runner but it’s actually been a good reminder. Running, I’ve learned, is a humbling sport.

Going into my second season of long distance training in the program, I was feeling a bit full of myself. I grew cocky and disregarded the most basic rules–warm up, don’t go out too fast,** and gently stretch when you’ve finished the run. I wound up pulling a groin muscle and was rewarded with visits to a physical therapist three times a week for a month. The pulled muscle was not nearly as painful as sitting on the bench, watching my friends at practice and digesting my first slice of humble pie.

**I blamed it on the pace group but I’m the one whose legs were moving; I didn’t have to try to keep up.

The third season was better. I trained for a full marathon and ran smarter. I was Born to Run, Ready to Run, and Running Down a Dream (depending on your favorite running song). That is until I developed a nasty bout of tendonitis in my right foot just three weeks before the race. At that point it was a team effort to get me to the starting line–a podiatrist who understood the whacked mind of distance runners, and my coaches and teammates–veteran marathoners–who were able to convince me to curb my mileage until race day.  “You’ve run the twenty milers,” they said, “Don’t worry. You can go the distance.” Fortunately, I listened and they were right. I finished the marathon but–me being me–not without sustaining another injury. So, I sat out the holiday season and filled up on pie (this time, I’m happy to report, the flavor was of the pumpkin variety). Did I mention those ten pounds?

In the new year, I laced up my Sauconys and returned to the running road. It felt so damn good to be out there again. I assured the coach I would run conservatively, build my mileage and pace slowly. I certainly wasn’t going to repeat any of my initial mistakes. No way.

That is, of course, until I did. Re-joining my pace group for an early morning run around a nearby lake, I started out fast and tried to keep up. How was it that suddenly everyone was so speedy? At the water stop, I cut the run short by two miles, walked the track with a buddy, then drove home. No harm done, right?

Wrong. That same afternoon, I went to a movie. When I tried to stand up after sitting for two-plus hours (why are so many bad movies nearly three hours long?), my left leg didn’t want to cooperate. I had pulled my groin muscle…again. How had I done that? Cue the Greek chorus:

“You went out too fast. You tried to keep up with faster runners. And you didn’t warm up,dummy!”

What would it take for me to learn? Apparently, a few more resolutions around the track on an injured groin muscle. Hmmm, I wondered. That was strange. Why did I feel like I was running on a slant?

Greek Chorus: “Yoo hoo, maybe it’s because you’ve knocked yourself out of balance by insisting on running when you’re hurt?”

Turns out that’s exactly what I had done.

“What happened this time,” asked my physical therapist.

This time. Ouch. Did I dare admit I had repeated not just one mistake, but two?

Guess not. And it turns out I had broken another Rule of the Running Road in the process: Coming back from injury too quickly.

Maybe there’s something to that old expression, “three times is the charm,” because these days, I’m not only listening to my coach, I am following his advice. When he tells me not to do another mile repeat or to walk–not run–down the hill, I follow his instructions. And when almost every single runner out there passes me early on, I remind myself that at least I’m back on the road. I’m running again, injury-free. And that’s what really counts.